The Encyclopaedia Judaica has been the leading source for information on the Jewish people, the Jewish faith and the state of Israel - how they have shaped and been influenced by our world. As the result of a U.S.-Israeli publishing partnership, the second edition of this important reference is now available for a new generation.

Metal-Work Cases for Scrolls of the Law 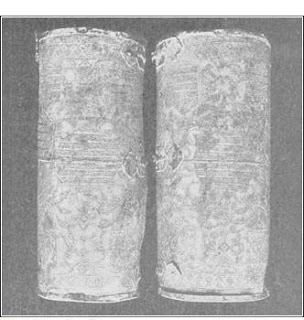 Metal-Work Cases for Scrolls of the Law,
with Floral Designs and Hebrew Inscriptions,
Dated 1732.(Formerly in a synagogue at Bokhara,
now in the possession of M. N. Adler, London.)
Aharon's Jewish Books and Judaica
600 South Holly Street Suite 103
Denver, Colorado 80246
303-322-7345
Posted by Jewish Blogs at 10:46 PM No comments:

Labels: Metal-Work Cases for Scrolls of the Law

Case Containing Samaritan Scroll of the Law.
Source: (From a photograph by the Palestine Exploration Fund.)

Binder for Scroll of the Law 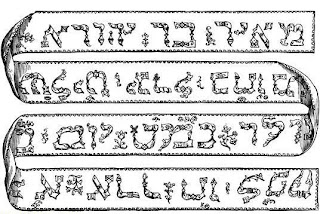 Labels: Binder for Scroll of the Law

Scroll of the Law from Tafilet, Morocco. 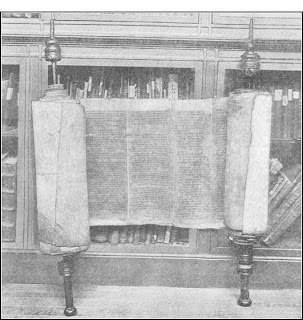 Caption: Scroll of the Law from Tafilet, Morocco.
Source: (From the Sulzberger collection in the
Jewish Theological Seminary of America, New York.)
Aharon's Jewish Books and Judaica
600 South Holly Street Suite 103
Denver, Colorado 80246
303-322-7345
Posted by Jewish Blogs at 10:50 AM No comments:

Labels: Morocco, Scroll of the Law from Tafilet

Breastplate for Scroll of the Law 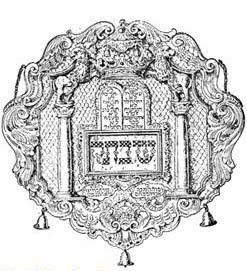 Labels: Breastplate for Scroll of the Law

Scroll of the Law from China 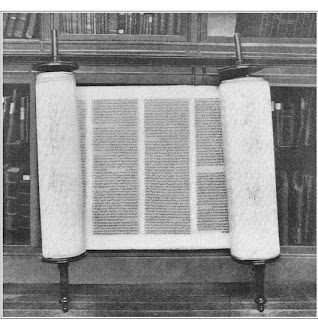 Scroll of the Law from China.
(From the Sulzberger collection in the Jewish Theological Seminary of America, New York.)
Aharon's Jewish Books and Judaica
600 South Holly Street Suite 103
Denver, Colorado 80246
303-322-7345
Posted by Jewish Blogs at 10:16 AM No comments:

Labels: Scroll of the Law from China

Scroll of the Law, with Crown, Breastplate, and Pointer. 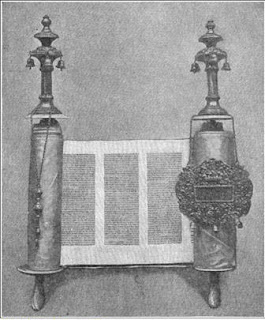 The only passage in the Torah in which ink is mentioned is Jer. xxxvi. 18. It would evidently, however, be a mistake to conclude that it was unknown in earlier times, for in this passage "deyo" is spoken of as something well known. Perhaps the Hebrew word "katab" presupposes the existence of ink; and ink was certainly known to the ancient Egyptians. It has not been determined how ink was prepared by the ancient Jews; at any rate the Talmudic "deyo" designates no fluid ink, but rather a cake of pigment which had to be made liquid before use. This ink was made chiefly from soot. Oil or balsam-gum was used to change the soot into a tough, pitchy substance (Shab. 23a); and that made with olive-oil was preferred, as it gave the finest pigment.

Gallnuts, first mentioned by Marcianus Capella, are unknown to the Mishnah, but are mentioned in the Gemara. A mineral ink was "kalkantus" (χαλ κανθός), which was also used occasionally in Palestineunmixed. As the ancient world had mixed copper sulphate with the ink of gallnuts, R. Meïr (after 100 C. E.), a descendant of Greek proselytes, did the same with deyo, the national ink of the Jews. His object was evidently to make the writing more permanent, since ink with a mineral mixture has the advantage of penetrating the material written upon, although it also gradually destroys it. The writing was probably done with an "'et," which designates not only a metal style, but also a reed pen which corresponds to the Arabic "kalam" of to-day. As is still common in the Orient, the scribe used to carry the 'et or stylus together with the "keset hasofer," or inkhorn, in his girdle (Ezek. ix. 2-11). He carried also a particular kind of penknife ("ta'ar hasofer") wherewith to sharpen his reed pen and to cut the writing-material (Jer. xxxvi. 23).

Posted by Jewish Blogs at 8:29 AM No comments:

Metal Case for Scroll of the Law 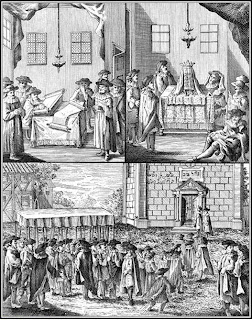 Labels: Metal Case for Scroll of the Law

Scroll of the Law

Labels: Scroll of the Law

The Talmud (Hebrew: תַּלְמוּד talmūd "instruction, learning", from a root lmd "teach, study") is a central text of mainstream Judaism, in the form of a record of rabbinic discussions pertaining to Jewish law, ethics, customs and history.

The Talmud has two components: the Mishnah (c. 200 CE), the first written compendium of Judaism's Oral Law; and the Gemara (c. 500 CE), a discussion of the Mishnah and related Tannaitic writings that often ventures onto other subjects and expounds broadly on the Tanakh.

The terms Talmud and Gemara are often used interchangeably. The Gemara is the basis for all codes of rabbinic law and is much quoted in other rabbinic literature. The whole Talmud is also traditionally referred to as Shas (ש"ס), a Hebrew abbreviation of shisha sedarim, the "six orders" of the Mishnah.

Posted by Jewish Blogs at 9:08 PM No comments:

Shofars - Use in modern times

Use in modern times

In modern times, the shofar is used only at Rosh Hashanah and Yom Kippur. It is blown in synagogues to mark the end of the fast at Yom Kippur, and blown at four particular places at Rosh Hashanah. Because of its inherent ties to the Days of Repentance and the inspiration that comes along with hearing its piercing clasts, the shofar is also blown after morning services for the entire month of Elul (excluding Shabbos), which is the last month of the year. It is not blown on the last day of month, however, to mark the difference between the voluntary blasts of the month and the mandatory blasts of the holiday. The exact modes of sounding can vary from location to location.

The shofar is now almost never used outside these times, though has been seen in western classical music on a limited number of occasions. The best known example is to be found in Edward Elgar's oratorio The Apostles, although an instrument such as the flugelhorn usually plays the part instead of an actual shofar.

A shofar is a ram's horn

Posted by Jewish Blogs at 7:12 PM No comments: